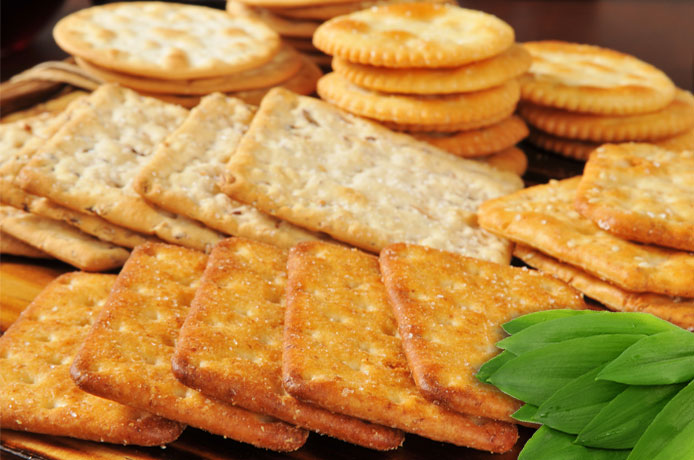 A cracker is baked food typically made from flour. Flavorings or seasonings, such as salt, herbs, seeds, and/or cheese, may be added to the dough or sprinkled on top before baking.

In 1792, John Pearson of Newburyport, Massachusetts, made a cracker like bread product from just flour and water that he called “pilot bread.” It quickly became a hit among sailors because of its long shelf life and also became known as hardtack or sea biscuit.

The name “cracker” comes from a fateful day in 1801 in Massachusetts when Josiah Bent accidentally burned a batch of what we now call crackers. As the crackers burned, they made a crackling noise, which inspired the name.

In American English, the name "cracker" is most often applied to flat biscuits with a savory, salty flavor, in distinction from a "cookie", which may be similar to a "cracker" in appearance and texture but has a sweet flavor. Crackers may be further distinguished from cookies by the manner in which they are made. Crackers are made merely by layering dough, and cookies may be made in many of the same manners a cake would be prepared.

The holes in crackers are called "docking" holes. The holes are placed in the dough to stop overly large air pockets from forming in the cracker while baking. Crackers come in many shapes and sizes - round, square, triangular, etc.