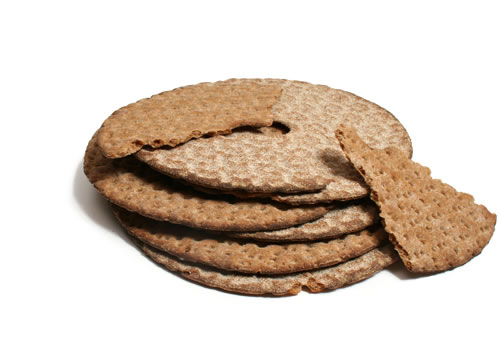 This hard cracker like bread, can also be called hardtack (known in Sweden particularly as knäckebröd and in Finland as näkkileipä), is baked without the addition of any leavening.  Crisp bread owes its long shelf life to its very low water content (5–7%).  The hole in the middle of the large rounds is there because in previous generation the rounds were stored on poles overhead in the kitchen.

Fäbodknäcket, a little crisper and thinner with a delicious homemade taste. A little more luxurious bread for festive occasions.

Brungräddat, a tender and good crisp bread, baked according to old family recipes. Brungräddat, which is baked a little longer than Normalgräddat, will be slightly browner and have a richer flavor.

Normalgräddat, Leksand Crispbread is baked today as the traditional old family recipes. A real family favorite that is suitable for all kinds of meals. We bake with the Swedish Seal labeled locally grown wholegrain and water from our own source.

Whole grains contain vitamins, minerals and fiber. The fibers hold your stomach in shape, blood sugar at a steady level and gives a great feeling of satisfaction. No added sugar or fat - healthy vengeance.